The past three months towards the end of the year 2018 seemed lean and tough, as Zach tried to make ends meet. He lost his job back in September, and had tried in vain to secure another. He was busy with entrepreneurship, building his advertising agency, but business was slow, and his venture required time and more investments to pay him back. He was a smart, hardworking man, very talented but equally hard headed. Some of the jobs his family and friends referred and recommended him did not appeal to him since they would disorient his focus, which was purely to be a force in the creative industry. He had done his research, had an excellent business plan and needed time, resources and a guiding hand to help him navigate the deep waters he wished to navigate through.

The three months were some of the toughest he had ever faced, ever since settling down in Nairobi to work and pursue his dream. He knew he would be successful one day, but the process sometimes overwhelmed him and made him almost give up. He loved taste and good things in life, but lack of money forced many times to compromise on the high standards he had set for himself. He had to move from the 2 bedroom flat to a bedsitter so as to manage his rent and bills. His suits, all slim fit and designer were safely tucked away inside his wardrobe, and only occasionally wore them on special functions and when going to meet potential clients and business partners. He preferred putting on jeans and t-shirts maintain a low profile and mind his own business most of the time.

One of the things that get people in Nairobi up and running as early as 3 am in the morning to look for Otongolo, is rent and payable bills. It could be easier to live in your own house and work around other issues but rent is off the list of monthly needs. Paying that amount every month around a specified date for a person not working requires you wake up and hustle to find the coin and pay-up. The caretakers of the rent houses do not give a damn who or what you are, but receipts as evidence of money in the bank always do the talking. Zach had been on the receiving end of the Nairobi Justice, and it really humbled him when he found his door locked over accumulated unpaid rental bill. He had to part with his pricey, 55’ Samsung flat screen he had worked his socks off to purchase for a throw away price to a shylock, who gave a loan to settle the rent, and was unable to pay back in time. That settled it. Zach was seeing another possibility of his house being clamped again, and he laughed at how it resembled the kanjo clamping down cars that were parked without paying up the fee and the drama that unfolds, especially from the exasperated car owners.

On that Friday late morning, he lacked fare to go to town, and instead of borrowing more to add to his loan burden, decided to visit the Kalaa Kalaa Supermarket, the new sensation in the estate. He walked by to newly build nearest mall, which fortunately was a few metres from where he stayed and went around doing window shopping, and self-motivation.  Rent was due, and he knew the burly caretaker was about to call him anytime demanding for the receipt or clamp-down. He was really down and needed so much in his house. As he walked around touching, reading, admiring, budgeting and admiring the well displayed goods on the shelves, he came face to face with Mama Sarah, his Land Lady and whose son, Jumba was the caretaker and estate manager. She was also a no-nonsense person, with a swift tongue good for lashing. She had once confronted, Pascal Onyango, his immediate neighbor over issues of clandestine life, and what a dress down it was. Zack always tried and avoided her at all costs, and would rather deal with her son, who was good and understanding if well talked to and given something aside. 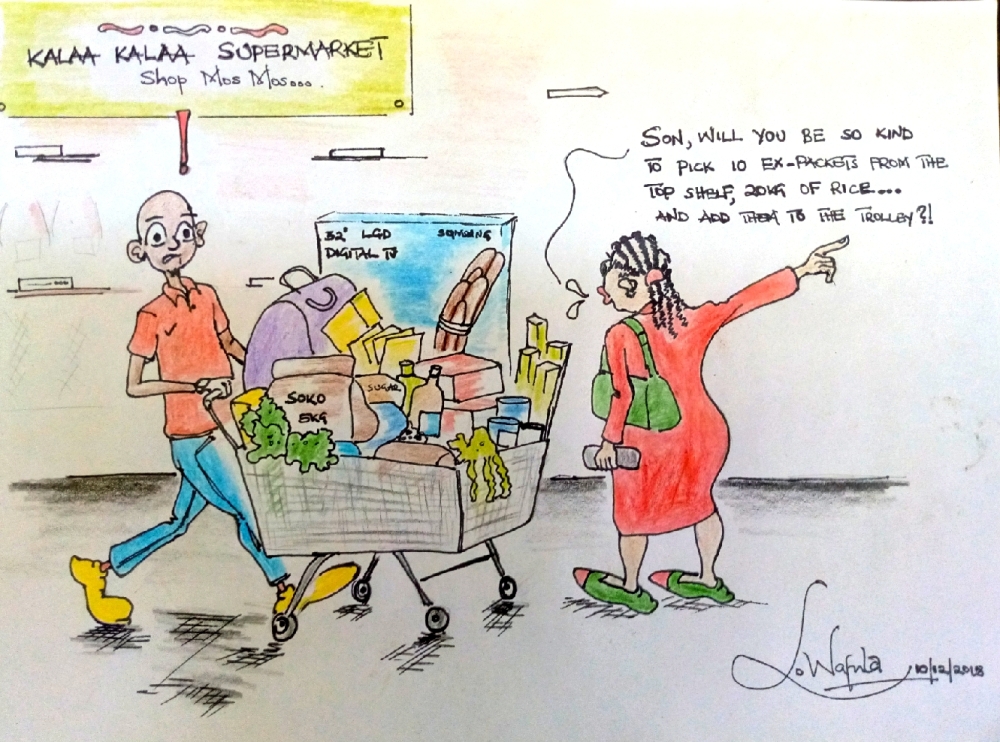 She walked straight to him directly  addressed him in his full name, throwing him a motherly sweet smile that totally smothered and threw Zach off-balance. It was the least of his expectations, especially coming for her since he had never even talked to her or shook her hand. Recovering from the shock, Mama Sarah let him catch his breath before politely asking him if she could help her do shopping. She had already pulled a trolley into his hands and was already putting in the goods. It took almost one hour to finish walking around and the shopping trolley was full to the brim. She randomly asked for his opinion on some items, and went on to direct him on what to pick and drop into the trolley. By the time they arrived back at the, Zach was sweating and he struggled to keep up with her and the labor she put him through. At the counter, a long list of items purchased was processed, and a whopping Ksh. 51,308 popped up, which she calmly paid through her credit card. He had never seem so much shopping, and for that amount.

She asked if he minded assisting her getting them to her car which was parked outside, load up and accompany her home to unload. He wanted to excuse himself and leave her to go sort our his troubles, but something inside of him stopped him from taking that step. Instead, he politely nodded and quickly carted the packed goods away to the Mercedes Benz and silently sat in the back seat holding some of the fragile items, as she drove home. The ride was smooth.  The vehicle though an old model, was in good condition and well maintained. The way she handled the German machine told of her fondness and attached to it. A few minutes later, having arrived, parked in her compound and unpacked, as he readened himself to deliver the good into the house, she stopped him in his tracks and frankly told him, “Hello, son. You have a beautiful soul. Keep up your good manners. I am very impressed. You are one of the kind, in our current generation of youth.”

She took the glasses he was carefully grasping in his hairy arms, and told him, “Let me have this. This is all I need son. Take the rest to your house. Here, have this token of good will for your kind heart, and all the troubles I caused you today.” She took some several thousand notes from her pink purse, all crisp, clean and neatly arranged and handed him.” Zach stood there dumb-founded, awe-struck, amazed and speechless, as it all began to sink in. this was more of a dream than reality. What had just happened? He pinched himself to make sure this was real. It was too much to take at once. Slowly, his mind began to make sense of it all, and the sudden light shower quickened his senses. He began to make way to his bedsitter on the first floor, his hands full, his heart beating hard, and his pockets heavy…