Today, the 15th of November is Mzee Mwai Kibaki’s birthday. We all celebrate the former president for the landmark improvements he made to our country and economy for the 10 year stint he was at the helm, as Head of State for the Republic of Kenya. Wherever the annals of history of Kenya are looked at for now and generations to come; his name stands out prominently, especially where political and economic matters are concerned. Now at 87 years of age, Mzee Kibaki is at ease ‘eating’ his pension, supervising his vast wealth and investments, reading magazines, and books that juggle his intelligent and curious mind, writing memoirs and being a doting grand-father to his grandchildren. Caveman+ Media celebrates his life works, legacy and undisputed impact to our Kenyan history, East Africa and Africa at large as a statesman, economist, astute business man and leader.

Born back in 1931, November, he has endured a long journey in politics and power to finally hit his goal to be president of the Republic of Kenya, and impact to millions of lives of Kenyans and leave an everlasting mark to our economy. Born and raised in Othaya, Nyeri, Mwai Emilio Stanley Kibaki attended primary school at Gatuyaini School for pre-primary education, Karima Mission School and Mathari School for his primary education. He later joined Mang’u School (1947-1950) where he passed with a disnctinction. An exemplarily intelligent student, he performed well throughout his early schooling and secondary education, thus assured of a bright future and open doors to many opportunities ahead. Indeed, Mwai Kibaki joined the prestigious Makerere University in Kampala University where he studied Economics, History and Political Science. He graduated in 1955, and returned back to Othaya with a First Class Honours Degree (BA) Economics.  Through scholarship, he later enrolled to London School of Economics in England for post-graduate studies, and again emerged with another distinction in Public Finance. Later, he joined Makerere, this time as an assistant lecturer, and tutored students on economics, from 1958-1961.

He left the classroom and academia to pursue active politics, joining KANU the early 1960s. a distinguished, well learned, informed and focus individual he was, Mwai Kibaki was elected as the MP for now Makadara, Nairobi in 1963. That same year, he was appointed PS for Treasury, then Assistant Minister for Finance. In 1969, he became Minister for Finance where he served until 1982. He was an important cog in the early post-independence administration of Kenya, alongside other well-known personalities such as Oginga Odinga, Tom Mboya, Njonjo, Daniel arap Moi and others. Mwai Kibaki, who married Lucy Muthoni in 1961, opted for the Othaya constituency seat at MP after being beaten at Makadara during the elections. 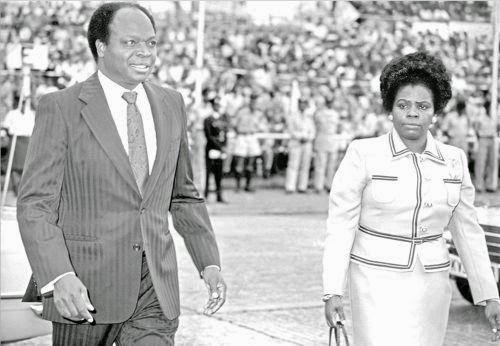 He served as the representative in parliament for his constituents from 1967 through to 2007, and cemented his status as a leader. In 1978, upon Daniel arap Moi taking power as president of Kenya, after the death of Mzee Kenyatta, Mwai Kibaki was his choice as Vice-President, for a period of 10 years. Other than the VP post, Kibaki served as Minister for Home Affairs between 1982-1988, and demoted to Ministry of Health (1988-1991), after disagreements with Moi and falling out of favour.

He resigned from KANU and government towards the end of 1991, and was amongst the first beneficiaries of multi-party system after amendments of the constitution. He founded DP (Democratic Party) and took a stab at presidency, as a candidate, alongside other opposition stalwarts such as Raila Odinga and Kenneth Matiba. Moi beat the uncoordinated opposition in the two elections held in 1992 and 1997, but Kibaki’s persistence paid off when he emerged as second in the polls, and officially the leader of opposition. Later, in 2002, elections were held as constituted in the laws of Kenya and he took power as President of Republic of Kenya through a consolidated opposition (NARC) that beat KANU.

It was a resounding victory for the opposition to oust the ruling party, and a signal of change pertaining national matters. It was the beginning of his legacy too, as he led the country through to 2007, and finally handing over power to his successor, the current President U. Kenyatta.

Kibaki, who preferred quietness and competency over publicity and ranting on the media, proved he was competent and shrewd in his leadership through his way of work, projects and administration. He delegated duties in his government, and pulled the strings behind the scenes. However, his legacy was well orchestrated and remains visible to this day. He initiated free primary education in 2003, which enabled millions of children across the country access education in public schools, and reduce illiteracy levels. The Constitutional Development Fund (CDF) program ensured public funds reached and assisted in the development of the most remote of areas countrywide. Although he lost the Referendum in 2005 to the Opposition, he successfully championed the amendments of the constitution through another referendum in 2010, enabling Kenya grapple with issues of governance and distribution of national wealth. Through the Grand Coalition Government, he was able to repair the ailing economy of the country, and enabled the GDP grow from a low 0.6% to a record 5% in 2011. Many state corporations, that were neglected and were on the verge of collapse were revamped back to operate profitably. Safaricom, Airtel and other players in the telecommunications sector enjoyed a good run in business thanks to the structures and governmental support in place. The construction industry also took a positive curve with increased developments and building thorough out the country. The Thika Superhighway, a major and ambitious project was taken up and finished under his administration, and has benefitted millions of businesses, people and individuals who had interests in areas the highway helped access. Millions of jobs were created year after year, and this improved the general welfare of wananchi.

Another key milestone that can be owned by Mzee Mwai Kibaki is the Kenya’s Vision 2030, unveiled in 2006. The roadmap helped in a big way that has since enabled the country, through the executive down to devolved governments focus on taking active steps towards development and raising the country’s GDP, through various national and county level projects.

To achieve this, he foresaw the change of the negative dependence on western aid, loans and debt accumulation. He projected and insisted on increased dependence on internally generated resources through taxes, foreign increased income and increased production through supporting the local industries to grow and be more efficient. He ensured good International relationships with super powers such as the US, China, Japan, Brazil, Middle East and even South Africa, to become vital economic partners through various project initiatives, investments and better terms of trade.